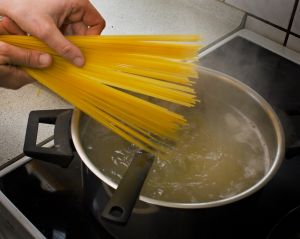 By no means is smoking cannabis the only way, or even necessarily the best way, to enjoy it. There are as many recipes for consumption of marijuana as a food as there are varieties of grass to begin with. Absent a good bong, pipe or packet of rolling papers, one can go still go culinary in order to achieve the same results. That’s right. You get to have the weed and the munchies at the same time.

The most basic form of stove-top pot is called “cannabutter”. Some people will be fussy, and use actual good buds to make the concoction; sensible cooks will be content to use the stems and shake instead. Simmering the butter and marijuana together will add a slight brown color to the mixture. It can then be added to cookies, brownies or whatever else you happen to be “baking”.

It may not have the instantaneous effects of a bong hit – in fact, consumed cannabis takes roughly an hour to fully manifest itself as a high – and it produces more of a “body buzz” than a “brain buzz”. The goofiness that affects some people when they smoke pot through a bong or pipe isn’t as prevalent when it is taken in as a food source. There are also an endless array of recipes for marijuana tea; the trick to making it more potent is to add milk, which contains fat, which helps transfer more THC from the plant to the tea.

Edible cannabis has made its way onto the shelves of medical marijuana dispensaries. Marijuana as food kills two birds with one stone, stimulating the appetite while filling the belly at the same time. Most people would find it preferable to choking down any number of pills every day. It adds another weapon to modern medicine’s arsenal in the fight against cancer. Doctors will tell you they need all the help they can get.

This entry was posted in Lifestyle and tagged cannabutter, cooking, food. Bookmark the permalink.