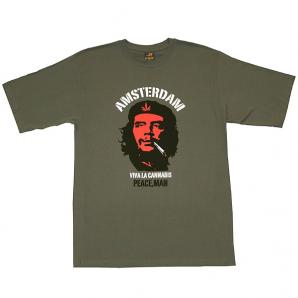 Che Guevara Smoking Weed T-Shirt - Like it ? Buy it !

In the United States and in other countries, the War on Drugs (as conceived during the Nixon administration) has included a running battle against those who produce and sell smoking paraphernalia, such as pipes and bongs. This has almost exclusively been the jurisdictional responsibility of local police, who may not be inclined to raid a head shop, but are perfectly happy to stake it out and write down license plate numbers.

The War On Error

In 2003 the federal government got involved. Despite having much bigger fish to fry at the time, John Ashcroft’s Justice Department devoted ample time and resources to shutting down the online sales of bongs and pipes. Dramatic raids were staged in places like Pittsburgh, Kansas City and Phoenix. Among those swept up in the action was film and music legend Tommy Chong, who was sentenced to prison for his role in selling bongs over the Internet.

Home Of The Brave, Anyway

This represented an expansion of government into Internet commerce that went largely unnoticed due to more newsworthy events taking place in the war on terror. What it did not do was reduce the availability of paraphernalia on the Web – it simply outsourced the job to places like the Czech Republic, where they are more than happy to receive our American dollars. Today, bong-related products and guides are readily for sale on such common general public websites as eBay and Amazon.com (Although if you really want something nice i’d suggest you to buy it here ).

Restricting access to bongs and pipes, and clamping down on one of the few pulsing veins of our economy, would seem to be worthy of a very low spot on our list of national priorities. It wasn’t then. It isn’t now. The future, however, may well hold changes where marijuana use (and the means by which it is smoked) is concerned.